If Only My Mother Really Understood 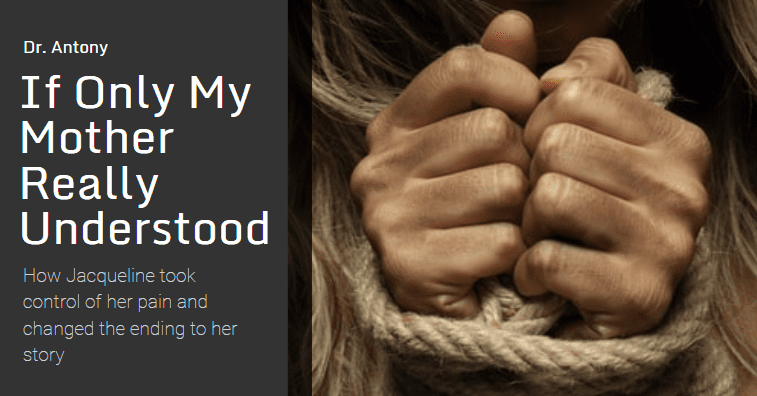 There was a time in her life that Jacqueline didn't think she would ever be able to go for a walk again. Day in and day out, for more than 3 years, Jacqueline lived with ankle and foot pain. The pain was so intense that it hobbled her. She couldn't wear shoes. Socks were problematic. Even the soft touch of her bedsheet sent jolts of electric pain up her legs and through her body. Jacqueline was diagnosed with CRPS (formally known as Reflex Sympathetic Dystrophy). Complex Regional Pain Syndrome (CRPS) is a form of chronic pain affecting the arms or legs.

She called me many times to tell me her mother was poisoning her with high dose opioids. Jacqueline is 18 year old and she was being treated with an opioid Fentanyl patch of 360mg of morphine a day for her ankle pain. This treatment was ordered for Jacqueline when she broke her ankle during cheerleading. This treatment had been in place for many years.

Jacqueline broke her ankle in 2015. While the ankle healed, the chronic pain in her leg remained. The pain limited her ability to walk, interact with others, and sleep. Jacqueline’s family doctor tried various other treatments to control the pain. Oral medications failed and left her nauseous. Physical therapy provided only temporary relief. The pain continued to escalate to an unbearable level.

The pain caused Jacqueline’s leg to swell and ache. She said it sometimes felt like they were on fire. Her leg was so sensitive, even a breeze caused intense pain. Jacqueline lived with this pain for over a year before her doctor referred her to a pain specialist. The specialist diagnosed her with Complex Regional Pain Syndrome (CRPS) and informed her she was going to live in pain forever. The only recommendation that brought any relief was the use of Fentanyl patches.

Treatment with the Fentanyl patches continued. The medication made her sleepy and groggy. She couldn’t function and was unable to graduate from high school. She was depressed and so she was treated with antidepressants. Her mother diligently took her to the doctor’s office and filled her prescriptions regularly. Her mother put the Fentanyl patches on her back, wrote the date on each one and changed it regularly. One day, Jacqueline decided to take the patches off. She went into severe withdrawal and had to be hospitalized for three days.

She was brought to me for consultation and her family doctor’s license was suspended. Her mother insisted that increasing the dose of medications would result in better pain control. I explained to them, “Jacqueline is not a candidate for chronic opioid therapy. Increasing her pain medications is not going to help, but it could potentially cause her to overdose.”  I further explained that her pain condition was caused by a hyperactive sympathetic nervous system. My treatment plan was to wean her off of Fentanyl patches over a period of three months. Then we would try spinal cord stimulator therapy which is a procedure known to relieve nerve pain.

Her mother did not believe me. Many doctors had told them that the pain was incurable. She rose from her chair and swore every which way she could at my staff and I. She marched out of my office and dragged her daughter, who came to our office in crutches, along with her. I was worried about Jacqueline, and her beautiful helpless face haunted me for weeks. I remembered seeing a flicker of hope when I explained how the procedure worked to her. But that hope turned to tears when her mother insulted me.

With this vivid memory, I answered the phone call.  Initially, Jacqueline complained that our office staff had no empathy and that it was hard to get a hold of me. But then she apologized for her mother’s bad behavior. Against her mother’s wishes, she moved out of their house. She moved in with her boyfriend, who promised he would help get her off the medications. Jacqueline told me her mother overmedicated her and had almost poisoned her because of her pain complaints.

She was using two patches now but was able to get off the 50mcg patch. She hadn’t stopped using the 100mcg patch as she was afraid of suffering from withdrawal symptoms. Jacqueline’s story had changed since we last spoke. She wanted to cooperate with my proposed treatment plan. She wanted to do whatever it took to get off the medications and was willing to try the procedure to control pain. She had decided to not share this decision with her mother. She told me that she would come to her appointments with her boyfriend, who was a great supporter of her decision.

Before our treatment plan Jacqueline was used to the constant pain she was experiencing. It became her new normal. Six months after treating her a successful spinal cord stimulator placement, I saw someone free of pain. “Now, I can actually go play pool in the evenings. Before, I was basically housebound. I can go hiking in the park now, which feels pretty amazing," Jaqueline said. “I never thought I'd be able to do something like this ever again. This is like night and day for me. I really feel like I've been given my life back."

What are the signs and symptoms of CRPS?

How is it diagnosed?

What is the treatment for CRPS?

What is the role of opioids in the treatment of CRPS?

What is Spinal Cord Stimulation?

I feel it is important that we ensure spinal cord stimulator therapy is considered a normal part of pain management care. This would eliminate the problem of patients suffering with failing therapies because of a lack of information available to the patient, family and local medical team.

Six months after receiving the spinal cord stimulator placement as a treatment for her CRPS, Jacqueline was in control of her pain. She felt like her life was given back to her.

Do you know anyone suffering from CRPS?

Please schedule an appointment with us, we'd love to be part of your success story.

Do you want to learn more about CRPS?

Author
Manonmani Antony, MD, DABA, DABIPP A triple board-certified pain physician who is passionate about empowering patients to live their full potential, Dr. Antony was motivated to start her own practice in order to promote her pain philosophy. She believes that all pain patients are capable of establishing the safe, sustainable habits that will enable them to take their lives back.